Description
Wyverns are large, furry winged beasts that make their roosts on mountaintops and at the tops of very large trees. They appear much like a cross between a drake and a bat, with four clawed limbs which they walk on the ground and two large wings with thin fleshy membranes spread between their “fingers” They have no tails, but very long necks with large batlike heads crowning them. They are fairly unintelligent, and like drakes, they’re very solitary and territorial. Unlike drakes, they have a much quicker life cycle and metabolism, and their various parts are worth much less, making them more of a nuisance than a worthy big game. That being said, they are known for being wildly delicious, and hunting a single one down can feed a whole town for a couple of days, as they’re about the same size as a drake, between three and eight meters at the shoulder and between eight and twenty meters long, head and neck included.

Behavior
Territorial, hunger-based aggression. They’re also remarkably bad-tempered, even when outside of their own territory and not hungry.

Weaknesses
Not particularly resistant to any damage type, their wings are huge weak points, their bones are surprisingly brittle to allow non magical flight 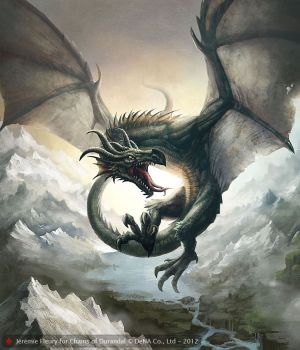