Description
Unicorns are an extremely rare form of naturally occurring fauna the world around. They are featured in many stories, and play a large role even in recorded history, showing up only in the lives of those who will go down in history. Their actions are mysterious in the extreme, leading many to believe that they are servants of the Moon Dragon, though this has never been confirmed. What is sure is that unicorns almost always show up to help rather than hurt. One of the first recorded instances of a unicorn is in Gravican history, when Gravan II was grievously wounded by a would-be assassin in his hunting woods, and left to die. He crawled through the woods, with an open gut wound for two days, almost giving up hope as he reached a clearing, and though he was quite delirious at that point, he remembered in full clarity the pearlescent-white fur of the beast as it came to stand over him, then took a knee and pressed its horn to his wound. The horn let off a glow, and his wound stitched itself back together. Most accounts of unicorns describe them this same way, with almost iridescent white fur, showing up at critical moments after periods of intense hardship, and bestowing some sort of gift. The Armusian diadem, worn by every leader of the church since its inception, imbued with powerful divination magics, was supposedly given to the first high priest after a similar struggle, by a unicorn. It is said that the blood of a unicorn is a panacea, able to cure any disease in lieu of the unicorn’s own intervention, and for this reason occasionally people attempt to hunt the beasts. Sometimes they’re successful, though far more often they either find nothing, or are slain by the beast’s powerful Truths and pointed horn. Location
Forests

Behavior
Enigmatic, occasionally appears before those with heroic destinies, sometimes with aid.

Danger Level
Variable. If you’re non-threatening, typically they are as well. They are Extremely dangerous to those who draw their ire.

Strengths
Very fast, much stronger than one might expect, wields powerful innate Truths of healing, probably others as well.

Weaknesses
Infernal Truths are devastatingly effective against them. 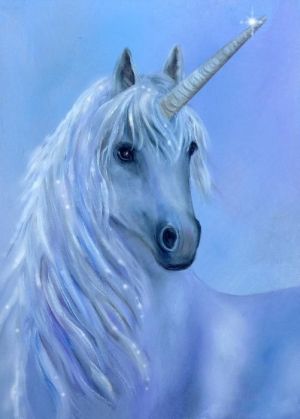