Description
The spawn of Covrudurth himself, these dragons are created wholly out of the magic and will of the patron dragon of Death. They are massive creatures, ranging from twenty to sixty meters in length, and they are imbued with a fragment of the power of Covrudurth. Generally speaking, they appear to be smaller forms of a True Dragon, but cold and rotting, somehow flying on wings of decayed, tattered flesh using their magics. Though Covrudurth has little use or patience for mortal worshippers, sometimes these undead dragons will pose as their master, spreading their hideous Truths as gifts to those who would worship and offer sacrifice. On rare occasions, they even embed themselves into these necromantic cults, sitting at the top of a pyramid of death and despair constructed by the mortals they pull under their wings.

Location
Anywhere, though almost never in warm places, or places with frequent sunlight.

Behavior
Behavior: Highly dependent on the individual dragon. Some seek followers, some seek to be left alone, some seek only to serve Covrudurth directly. Generally speaking, however, they’re bad news for the whole region they appear in.

Danger Level
Extreme. Attempting to fight one of these with anything less than a whole squad of heroes is a fool’s game, sure to end in terrible, twisted agony. They are intelligent and manipulative in the extreme.

Strengths
Extremely strong, intelligent and cunning, and possessed of near-unsurpassable cruelty and mighty Truths to go along with these strengths.

Weaknesses
Fire and direct sunlight are said to effect these monstrosities. 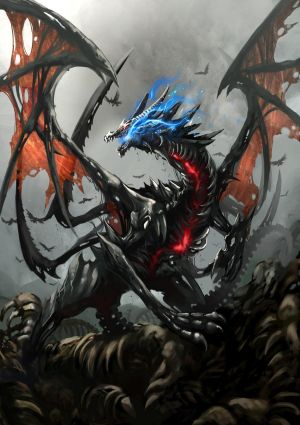