Description
Once a meat sludge has birthed thirteen imps, it ceases to make any of them, and simply begins to bide its time as it grows. Once it reaches a few hundred kilograms of weight, it will devour several of the imps it has made, usually four to six, and reconstitute them into something new, a Summoner, in much the same way as it spawned the imps. Summoners are born into the world with knowledge of a Truth, enacted by a ritual, which uses the bodies of several dozen sentient, living flesh-and-blood sacrifices. At the end of this ritual, their (deceased, by the end,) bodies coalesce into a new meat sludge, completing their circle of life. Generally speaking, after they have summoned a new sludge into the world, they will attempt to gather more followers and more Truths, or they will simply attempt to create ever more sludges. Either way, this behavior tends to be extremely destructive for anything living nearby, and their presence, once discovered, is a high priority for any civilization to immediately destroy. Some Summoners are instead born with the knowledge to summon a demon from the Steppes itself onto the material plane, though these are very rare. In appearance, summoners look like large half-men, half-horses with scaled skin and a magnificent set of horns. They stand about two and a half meters (eight feet) tall, and are about as long as a horse.

Danger Level
Extreme. Typically a more accomplished Summoner will have access to several Truths, though even without, they are fast, strong, and surrounded by minions and typically traps.

Strengths
Cruel, clever, highly intelligent, physically strong and fast, and with skin that is as strong as laminated leather and nigh-immune to fire.

Weaknesses
Generally very arrogant. They believe themselves to be more or less the ultimate beings. 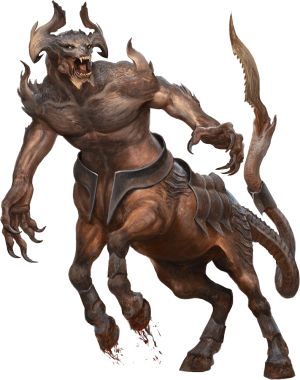