Description
One of the rarest of all Alemnetries, a Storm Alemnetry is created only when there’s an intense lightning storm directly over the convergence of several ley lines. The wellspring of these ley lines must be struck by lightning several hundred times before it vomits a bolt of pure white lightning back into the sky, breathing destructive life into the storm above, which immediately responds by growing far more intense and destructive. Winds blow faster, lightning strikes more often, and the rain or hail begins to beat down harder. Luckily, these Alemnetries get rid of themselves almost as quickly as they’re born, consuming and pouring down all the rest of the wrath that the storm would have had in a twentieth of the time. It is said that there are places in the tropics where Storm Alemnetries can rage for weeks at a time, annihilating whole island nations, but such times are rare in the extreme and rely on unfortunate weather conditions during their monsoon season. After they’re gone, they drop their heart, a small, compact orb about a foot in diameter, within which a small storm will always rage. They are said to be excellent devices to observe to learn the Truths which bind storms together, but they are almost always destroyed in their plummet from the sky, making an intact Storm Alemnetry heart an object of almost unparalleled value.

Strengths
Vastly, incalculably powerful. A natural disaster like no other.

Weaknesses
Short-lived. Typically they exist for less than an hour and concentrate the energies of a storm in a small area. Sheltering underground is advised. 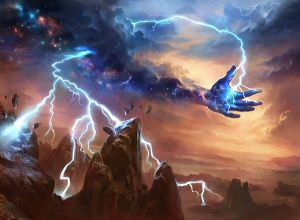