Description
This insectoid stands at 7’4” when not hunched over. Exoskeleton is covered with a flaky paper-like substance. Generally, they have two legs, two main arms, two medium sized mandibles under those, and two smaller mandibles alongside the chest section. Papery wings are relegated to the females, who are larger with a section of the stomach that isn’t covered by the exoskeleton. Both genders have a sleek head with specialized mouthparts for stripping trees. Within their mouth is a calcified, hollow spike that is used to drain fluids from prey.

Location
Large forests with high tree density around the center, otherwise tucked away in grottos. Their territory is often covered with flakes of Sporshieus Sheddings, which look like burned paper and feel like dead leaves. In the middle of their territory is a bulb-like structure made out of a fresher variant of these Sporshieus Sheddings, akin to a 7 foot tall, 8 foot wide beehive.

Behavior
Sporshieus Wasps are highly territorial within a twenty meter radius of their ‘wooden lanterns’. When a thing of average Human to Rehk weight walks into the territory of a Sporshieus Wasp, the Wasp will sense it and pop up from the nest by cutting through the ‘wooden lantern’. When in combat the Sporshieus Wasp will attempt to stab its calcified throat lance through the target's neck or other weak point, sucking the blood from them at terrifying speed. During this state of hunting and hunder it is very aggressive.

Danger Level
Variable. From a distance the Wasp is docile. It only becomes a threat when it senses prey above its nest. If the sensed weight is larger than a single human or they are grouped up the Wasp won’t leave their nest.

Strengths
Extremely long life, Sporshieus Wasps are known to live for hundreds of years without any deterioration in their physical or mental condition. Their blood is known to reverse aging in a cosmetic way, removing wrinkles and degraying hair. Very precise and quick attacks, their entire hunting strategies require their calcified throat lance through their prey’s neck, meaning their survival depends on quick and lethals attacks.

Weaknesses
Fire, their papery flakes and exoskeleton are bloth flammable, meaning that lighting them or their nest on fire would heavily wound the Wasp. Massed ranged attacks are also quite effective at putting down the Wasps given all of their attacks are close ranged, whilst female Wasps are likely to lose their wings if they take a volley of arrows. 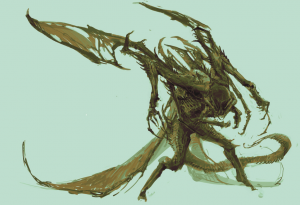