Description
“Hope spreads through each beat of its wings.” Solheart is a creation of Lacerta, the dragon of the sun, who stands sentry, to be the first to fight and the first to fall should the Black Dragon ever rise again from its long slumber. Frequently perched on an island nearby the volcanic island bearing Grytuss’ name, Solheart’s glow can be seen for miles around, even over the horizon. Occasionally, at the height of summer, where the world is hottest, Solheart can be seen in the distance, taking a break from its long watch in the warmth and sunshine. Unlike many of the other legendary phoenixes, Solheart’s presence is not conventionally destructive. In fact, Solheart is seen as an omen of good portents ahead, as when it flies over, crops grow faster and bear more fruit, undead and minor demons are torn asunder, people and animals grow more healthy, and most civilizations throw a celebration to mark the occasion. Though native plants and animals grow faster as well, and this can cause some problems, generally they’re seen as far and above worth the price. It is difficult to look at Solheart, as when it flies through the sky it is like a second sun, burning a bright, incandescent white, strong enough to blind anyone who stares too long, but it is presumed that Solheart is much like its smaller cousins, a huge, burning, majestic eagle.

Location
Frequently, the Island of Hoʻomaha ka lā. Otherwise, where it’s hottest in the world.

Behavior
Flies over the landscape bestowing its blessings on those below.

Danger Level
Titanic, though not because it is hostile. It’s just hot enough to boil your flesh from your bones if you draw too close.

Weaknesses
The return of Grytuss the Black 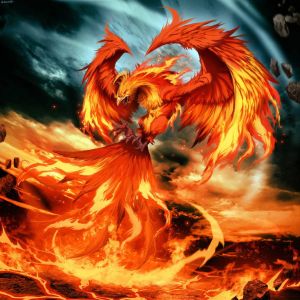