Description
A solar phoenix is the most common of all phoenixes, and more than a few are seen yearly. Some communities have even built up around a solar phoenix’s roost, giving it food and collecting its dropped feathers, which glow brightly and supposedly make arrows fly true. They appear as their cousins do, as huge eagles, though they are the largest of the minor phoenixes, typically being a little more than six feet, or two meters tall, and they have bright, glowing orange feathers. They can be rather dangerous, as when they take flight they catch fire, and leave burning embers raining down in their path, and their claws and beak glow bright with blazing heat, burning anything they choose to roost upon. Some people hunt them for these parts, as an ever-burning dagger made of a Solar Phoenix’s claw is a useful and treasured item indeed. Finally, they can breathe a cone of fire thirty feet out, which can leave hideous burns and flash-boil water.

Behavior
Acts like a bird of prey, willing to hunt just about anything, though they tend to avoid things of their same size or larger. 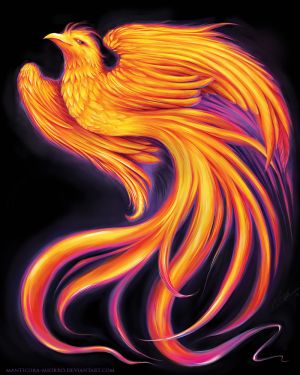