Description
Snotlings resemble chimps in most ways, about a meter tall, fur-covered humanoids. The primary difference is that their mouths are full of three rows of viciously pointed teeth, which regenerate like a shark’s, and they are far, far more aggressive to outsiders than they are to fellow snotlings. Two snotlings will almost always team up to hunt down other animals (and people) rather than fight one another, and this is true for gangs and colonies of up to hundreds of snotlings. They do not use tools, they are not clever, and they do not appear to have any intelligible language, though they constantly gibber in what sounds almost like a language as they attack things. A colony of the things sounds maddening, as they never stop their gibbering unless they’re sleeping, and there are never more than twenty or so of them sleeping at a time. They are carriers of all sorts of diseases, so a bite from them, though usually relatively non-serious at first, can have dire effects later on.

Behavior
Pack hunters, extremely aggressive and territorial, usually will fight to the death.

Danger Level
Low, though a crowd can be dangerous.

Weaknesses
Extremely dumb, somewhat scared of fire, physically relatively weak, generally being half as strong as a man. 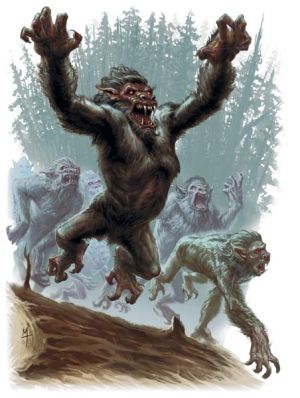