Description
A Shadow Alemnetry is nearly impossible to accurately define, much less actually see. They are elementals spawned from a blot of perfect darkness surrounding a leyline, beings of pure malice which exist only to quell light and the life which so reveres it. They can roll across the ground like inky black smoke, fly through the air like a cloud, take the form of humanoids to walk around, or even form themselves into huge leviathans in the depths of the ocean, and anything in between. The only constant is that their forms present themselves as patches of the purest, inky darkness. When they attack, they tend to flow over their target, whether a source of light or a living creature and starve it of oxygen. If this doesn’t work fast enough, they will begin to slowly dissolve the source until it ceases to give off light, or invade the very darkness inside the body of their target and begin to dissolve them from the inside, resulting in a quick, agonizing death. The Kingdom of the Caves has many stories about these things, noting their signs, an unnatural cold and dark, and telling their people to do their best to put an airtight barrier between themselves and the suspected lair of one, as this will keep the monstrosities out. The heart at the center of one of these things is about the size of a marble, and if it can be found and pulled from its inky, black body, the alemnetry will disperse. However, it takes a brave (or stupid) soul indeed to plunge into the sightless depths of a Shadow Alemnetry to search for such a tiny object.

Behavior
Seeks and snuffs out light and life.

Strengths
Formless: Can shapeshift at will to fit any shape, or occupy any place. Impervious to physical harm, very fast. 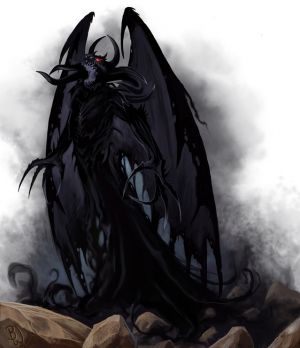