Description
Huge, blue and green-skinned humanoids with eight fingered webbed feet and hands, standing twenty meters tall and wearing simple clothes made of the skins of undersea beasts or woven from aquatic plant life, and generally wielding weapons crafted from the bones of those very same creatures, or things like lost anchors. On rare occasions, they wield weapons or armor more akin to those a surfacer might have, generally having traded for them. Sea Giants are extremely rarely seen, as they are a fairly insular people, created to serve the Dirgodog in the inky depths of the sea. They can breathe water just as well as they can breathe air, though since they are far slower and more vulnerable on land, they tend to remain in the water, even when they come to the surface to trade with the mortals. Generally speaking, since most equipment suffers greatly under the pressure and saltwater of their native home, they have little use for much of the equipment of those on the land, preferring instead to trade stories, in most cases. Occasionally, however, one will surface with reclaimed goods from a sunken ship, and seek waterproofed goods from mortal smiths, though even in these cases they tend to be very keen to trade stories first and foremost. They’re reputed to be excellent traders and attempting to swindle a sixty-foot tall giant who knows many Truths of the sea is generally a poor decision.

Location
Oceans, near the ocean floor, and in their trench-cities

Danger Level
Variable. Non-dangerous to most, however, if you attack one, it’s extremely dangerous. 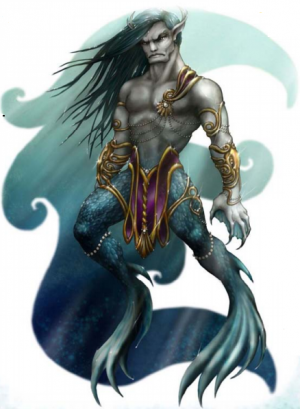