Description
An odd animal, these creatures appear to be scaled oxen, like some absurd mix between a gila monster and a bull. They give birth to their young live, and produce an extremely nutrient-rich milk which the beastfolk native to Anoma have long drank. Though the males of their species are notoriously aggressive and territorial, much like bulls, they can still be broken and domesticated after several years of intensive training, and due to their great strength and stamina, they make for excellent beasts of burden, or sometimes even mounts. Though they may act much like the bovines which they in part resemble, they have curious teeth, like a cross between fangs and molars, and they are known to eat just about anything that they can catch, though mostly they seem to prefer to eat plants.

Danger Level
Low-Medium. Caught unprepared, a Raptaurus can very easily slay someone, as its horns are long and vicious, and its clawed feet can easily rend those who fall underfoot who are not merely crushed to death by its prodigious mass. For someone prepared, however, they are not terribly dangerous. 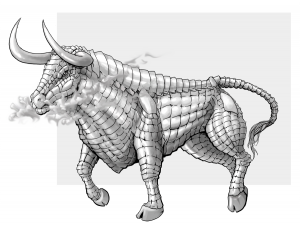