Description
Phoenixes of Undeath are strange creatures indeed. Where most undead are created through rituals involving Truths, they are fully capable of raising the dead without it, though their own means. Any creature slain by its raking talons or its mighty, sharp beak will eventually raise as an undead, under the control of the phoenix. Curiously, they don’t do much with their undead creations, with the exception of guarding their lairs. It is theorized that there is a specific necromantic Truth with which one can cause an undead phoenix to unerringly follow commands, but such a truth is not recorded. It may be the case, however, that they somehow simply recognize beings of necromantic power and simply follow them.

Location
Extremely rare, generally under the command of undead dragons or the servants of necromancers granted Covrudurth’s favor

Behavior
Generally found in the service of some other, more powerful creature, and will do as they command. When not in this role, they seek to slay less powerful creatures and grow themselves a small group of undead to serve them, until something shows up to command them. 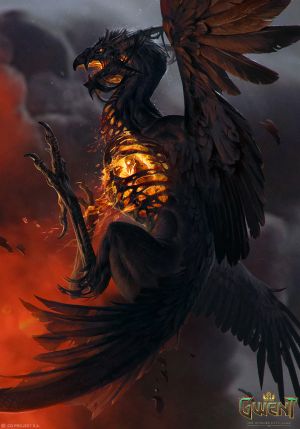