Description
Like a huge spider, six feet in diameter, phase spiders are a milky white form of hunting spider which do not build webs. There are many theories of exactly where phase spiders originate, though most agree that it was likely in the webs connecting the branches of the world. Regardless of where they came from, it is clear that they are bad news for most living things, all of which they view as food. They are intelligent, cunning, and extremely malicious, and their venom causes rapid cell putrefaction. Like Phase Dogs, they hunt in packs, though generally only packs of 2-3, utilizing their ability to phase between the material and primordial planes at will to great advantage, generally using one of their pack as a momentary distraction while another one pounces from out of the Dream, striking once to envenomate their target and retreating to let the excruciating toxin do its work, killing and liquifying its unfortunate victim from the inside out, and making for an easy meal for them. They are natural enemies of Phase Dogs, who will attempt to help anyone in the presence of the spiders.

Behavior
Extremely aggressive. Even if they’re not hungry at the time, they frequently will attack people for the sole purpose of securing an easy meal for later, or perhaps simply because they’re bored and want to kill something to entertain themselves.

Weaknesses
Creatures which can see and strike into the primordial dream negate their primary strength almost entirely. Because of how their musculature works, based on hydraulics rather than conventional muscles, a single successful strike tends to kill them if it pierces their exoskeleton, causing all of their highly pressurized innards to become widely strewn outtards. 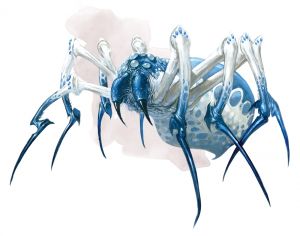