Description
A phase dog is a creature not unlike a small wolf, covered in shaggy white hair. Presumably fae creatures, they exist halfway between the Primordial Dream and the material plane, frequently hopping from one side to the other. Surprisingly intelligent, friendly, and playful, phase beasts have been known to pick mortals, seemingly at random, to accompany. Never a beast of burden, nor a subservient animal, phase dogs tend to be viewed as partners or allies, and can be extremely useful in the role. Naturally, they are pack hunters, working in coordination with their fellow Phase Dogs to bring down prey both on the material plane and in the Primordial Dream, and it is likely because of this that they seem to instinctively work so well with those who they choose to accompany. Like all creatures of their kind, while fighting they use their ability to disappear and reappear to their advantage, confusing their prey, and escaping to safety if one is injured or if their intended prey turns out to be too much for them to handle.

Danger Level
Medium. In packs, they are capable of hunting things significantly more dangerous than one of them alone could take on, but they are not likely to attack people. 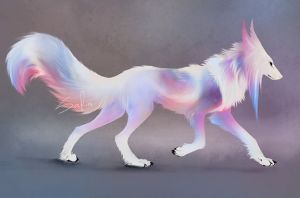