Description
The most prized of all phoenixes, and also one of the most rare, a Panacea Phoenix is the exact opposite of a Feverfire Phoenix. It is diminutive for their kind, only the size of a large eagle, around a meter, or three feet tall, with a metallic gold coloring. They are the fastest and most agile of their kind, as well as the most elusive. Every part of a Panacea Phoenix can be made, through various alchemical processes, into a cure-all, a potion, powder, or injection which, once used, will cure the body of any disease, purge any toxin, or even heal someone from the brink of death. Unfortunately, they cannot be tamed, as they are too intelligent, too stubborn, and simply die in captivity, resulting in people hunting them for their parts rather than attempting to capture them and hold them indefinitely to repeatedly harvest. Occasionally the roost of one of these animals is found, and those who live nearby will collect the downed feathers and droppings for as long as the Phoenix lives nearby. Unfortunately, they will move soon after their roosts are found, as they have long learned to fear civilization.

Behavior
Friendly, curious, though extremely defensive of its nest and young.

Danger Level
Variable. Being intelligent, they are possessed of moods and personalities, though threatening their young will always result in them becoming extremely dangerous. 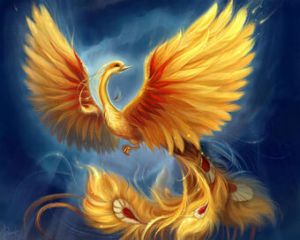