Description
An odd sight, to be sure, owlbears appear to be large, strong owls about the size of a brown bear walking on its hind legs. They make nests in large trees, scaling them with their long, dense, sharp claws and laying their eggs there. They’re also known to drag their prey up to their nests, holding the corpse of their next meal in their huge, sharp beaks while they shuffle upwards. In mannerisms, they’re much like bears, in that they will eat just about anything, will forage for food, and will attack things both if they’re hungry or if they’re too near their hatchlings. The primary difference is that owlbears seem to be very easily domesticable, and make for excellent pets and hunting companions. An owlbear raised in captivity will be as affectionate and protective as a dog so raised, though they have serious issues with aggression towards other animals, unless they were raised from a chick with those other animals. All told, one of the more lucrative trade goods that have been shipped back from Anoma are owlbear hatchlings and eggs, which have grown to be extremely valuable back on the mainland, where they’re treasured as companions and guard animals.

Danger Level
Medium. Their claws and beak are nasty, but a well trained fighter going in with foreknowledge should be able to fight one off, albeit with difficulty.

Weaknesses
Somewhat slow, tends to be defensive of specific areas where they have made their nest. 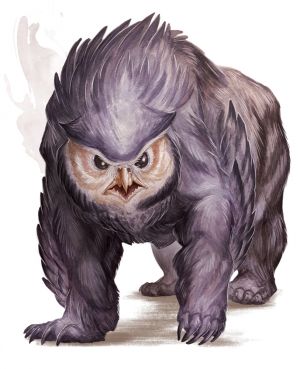