Description
Beings from the more twisted parts of the Primordial Dream, Nightmares have access to some sort of innate truth which allows them to immediately detect the worst and most dangerous fear of any group of people, and transform themselves into it. In their natural forms, which they revert to when they’re killed, they’re pale, featureless, human-sized creatures, with thick rubbery white skin which covers every inch of their body, not leaving any orifices, facial features, or even finger or toenails. Despite how disturbing their natural form is, they are almost never seen in it, instead preferring to always go around as their intended victim’s worst nightmare, following and stalking the person to feed on their fear, sometimes for weeks or months at a time before the striking, slaying, and devouring the person in the form they so feared. Curiously, if what they fear does not have the ability to eat, they will simply leave the body behind, untouched.

Location
Any, though typically within civilizations or gatherings of sentients.

Weaknesses
No matter what form they take, they do not get more resistant to weaponry. In addition, those who know Truths are entirely immune to their trickery and can see straight through the illusion they put up. Truths also greatly affect them. 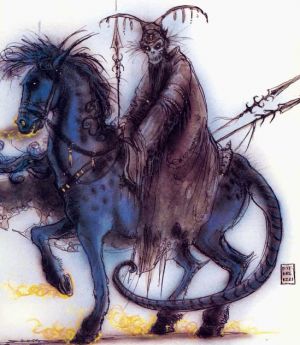