Description
Myrnthians are slim, twelve feet long beasts that have flesh that looks like thin bark. Their backs look like leaves, allowing them to blend in with dense foliage. They are covered in spines that run down their sides. They have four appendages that are ended by grasping hooks that they use to climb and jump. Their body resembles a tube everywhere except for their midsection. Their midsection is bulbous and hard, containing a tough exoskeleton that acts as the cover for a good portion of their organs.

Location
Temperate forests and jungles. Their broods begin in the middle of the selected habitat and spread out over the course of a few years as the family develops. Eventually, individual families will leave their homes to find new forests and jungles to set up in. The hive is centered around an 'offal pile' that contains all the parts of the prey, this is where the queen of the hive lives; They burrow into the Offal pile and command the hive via vocalizations and pheromones.

Behavior
Myrnthians are opportunistic hunters, meaning they will try to hunt and kill anything that matches up; they have an elevated intelligence in comparison to other opportunist hunters in their environment, being able to accurately size up opponents before choosing to fight. If they are being hunted and attacked suddenly, they will let out a low-pitched call. This will cause a contingent of the hive to start pooling around the area before attacking. If they have the upper hand and are starting the hunt, they will let out a 'hunting call' which will bring over other Myrnthians slowly as the hunt escalates; When the other arrive, they will make the same call, calling over even more of them. If too many of their calls die out, the Queen will let out a loud vocalization, calling them back to the pile.

Danger Level
Variable. One Myrnthian isn’t too much of a challenge to kill, but twenty is utterly lethal. This means that hunting them is more a matter of speed than a matter of in-depth tracking given their social nature. Their attacks cause large, thermal explosions which means that they can actively cook their prey if enough fire around a prey at once.

Strengths
Numbers. With ten-fifty individuals in a brood, they are a formidable force when faced as a group. Explosive Attacks. Their attacks spew out a red-slime that explodes when it comes into contact with air over the course of a few seconds (3 rounds). It puts out quite a bit of force and heat, scorching and blowing holes into flesh. Climbing and moving speed. They are equipped to move from tree to tree quickly and safely.

Weaknesses
Individual strength. Alone they are not difficult to put down with a well-placed crossbow shot or strike from a blade, and if all else fails you can always burn them out. Land movement. While on land they are not graceful movers, they are slow and predictable. Weakness to fire. Their skin is papery and overall they are fairly flammable. Their internals however are not, meaning that the damage potential is limited to the upper layer of skin. Predictability. They act via a rigid system of vocalizations, so hunting them is a matter of learning and exploiting these vocalizations to be one step ahead of the Myrnthians.

Myrnthian Jelly
The main allure of hunting Myrnthians is their jelly. Their jelly is predictably explosive, meaning that one is able to cause the explosion via predictable means. The jelly, when not exposed to air, is a deep olive color and has the texture of snot. When it is exposed to air or shot out of a Myrnthian's mouth, it turns a deep red only a few moments after contact. It will then start expanding, feeling on the air as it grows larger and larger. After a period of a few seconds, it will have grown to three times its size and started to explode. The explosion caused by an average shot of Myrnthian jelly will cause a five-meter by five-meter explosion, with the jelly being the epicenter. The explosions are both thermal and force-based, pushing and scorching those who are in its radius. The more jelly that is lumped in one area, the larger the explosion, which means that multiple Myrnthians can shoot their jelly on the same thing and cause a progressively larger explosion.

Harvesting Myrnthian Jelly
Harvesting Myrnthian jelly is a matter of speed and precision. The organ that creates the jelly will immediately start decaying upon the death of the creature and will need to be cut out quickly. The organ will need to be covered in something that either sucks out oxygen or actively blocks the jelly from receiving it. Certain alchemical fluids can be used to achieve the first method, but the second method, while more dangerous, is far cheaper. Putting the organ into a tight, metal shell that can be closed tightly is usually enough to keep the organ away from the air long enough to be refined and used. 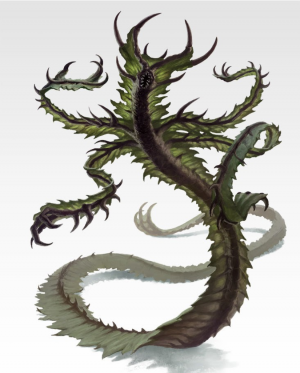