Description
Much like snotlings, Morlockes are about a meter tall and appear to be hairless chimps with huge, disgusting bulbous eyes. Many think that they are directly linked to the snotlings, as they have the same mouth structure, with rows of regenerating teeth, but they are significantly more threatening than their fur-covered counterparts. They are somewhat intelligent, share a language, use simple tools and tactics, and are intelligent enough to control their territorial instincts and retreat to fight another day. They hunt in packs, and like snotlings, only eat meat, making them an immediate threat to any civilization which settles down near a cave system which they inhabit. They enjoy stealing cattle, children, and individual workers who they can catch off guard, wound, and drag back to their caves to eat raw.

Danger Level
Medium. Though they are physically weak, their use of tools and tactics puts them far above their snotling cousins.

Strengths
Tool use, ambush tactics, pack hunting. Smart enough to call a retreat without being cowardly.

Weaknesses
Physically weak, light, especially sunlight, can blind them, and they are terrified of light sources. 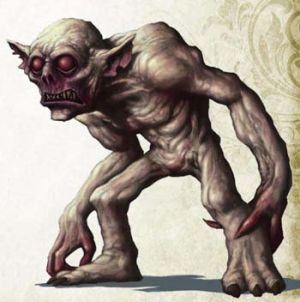