Description
On extremely rare occasions, when the Moon Dragon gifts someone with knowledge, she will also gift them with a steward to be sure that the magic is used in a way that the moon dragon approves of, or that their quest is successfully completed, and these stewards are the Moon Alemnetries. Much like the dragon they come from, they are ultimately mysterious and are possessed of great and powerful Truths, which they use for various purposes. Just as many stories involving them end with them ending the life of the person they guard after the person has completed their quest as them protecting them until the end of their natural life or simply disappearing when they deem it the correct time. Sometimes they deem to not protect their ward at all, simply allowing whatever is to happen in a battle to happen. Further, nobody has ever successfully killed one of these, they just disappear when their time is done, just as wordlessly as they behaved traveling through their entire lives. They appear as a bipedal person, about the size of a human being, made of shiny silver moonlight.

Danger Level
Extreme. They protect their intended person, but they are also known to take the life of their ward after their quest is over.

Weaknesses
Those immune to magics are far harder to damage for these things. 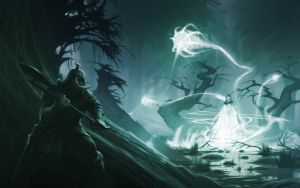