Description
The twisted servants of Grytuss, mist men are not quite undead, but they aren’t quite living, either. It is said that when Grytuss’s servants act on the material plane, one of their most potent weapons is the Mist of Grytuss, a foul, miasmatic greenish-white cloud that sticks low to the ground. Those who dwell too long in the mists, or who are particularly weak-willed rapidly lose their minds and souls to Grytuss, and the story goes that the more minds and souls he devours, the closer he gets to reawakening. It is said that most of the volcanic island under which he rests is covered in this mist, and large groups of the Mist Men work and toil there to create endlessly more of the stuff. Regardless of how the mist is created or spread, its effects are obvious. Those who succumb to the mists are entirely incapable of reason, their flesh begins to slowly droop, and then rot, their hair falls out, and they lose all memory of their past lives, knowing only that they must serve Grytuss. Whether they somehow hear the sleeping dragon’s commands or they are just maddened, going about their business randomly is unknown, but when the mists finally clear, they always go with them, disappearing into the wilderness, or wherever the mists go.

Location
Anywhere the mists of Grytuss appear, the Mist Men do too.

Behavior
Extremely aggressive. Determined to expose more people to the mist, and frequently religiously bent towards Grytuss, sometimes destroying buildings or gathering materials to build altars to the Black Dragon.

Danger Level
Medium. Though individually they are not terribly dangerous, they always appear in groups.

Strengths
Completely unfeeling. It can see in terrible conditions, surprisingly strong and agile. Will use weaponry, tools, and basic tactics. Can teleport within the mists, though they cannot teleport into or out of someone’s line of sight, including to other patches of mist. 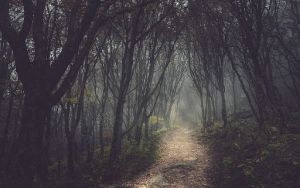