Description
When someone makes a deal with Covrudurth for everlasting life, or just for a reprieve from the cold, he does not deal fairly. He will give the person what they ask for, life everlasting, or a form which does not require shelter from the hideous cold of his domain, but rarely is this what the person truly seeks. Instead, he imprisons the person’s soul within their body, severing the link of energy between the two which vitalizes and sustains the body. The person becomes a rider behind their own eyes, unable to influence the actions of their own form any longer. True to his promise, the person can, depending on what the zombie does, last forever trapped inside this form, and the zombie has no heed for the crippling cold of the tundra.

Location
Everywhere, but significantly more common closer to the tundra and underground.

Behavior
Zombies are mindlessly driven by hunger and will attempt to capture and eat anything they see which is made of meat. Occasionally they are armed with whatever they held in life, though if they successfully make a kill, they frequently discard their weaponry to eat with both hands. Beware, zombies carry disease!

Danger Level
Low, though crowds can be dangerous, and the diseases they carry are a far more significant threat than the initial threat of the zombie itself 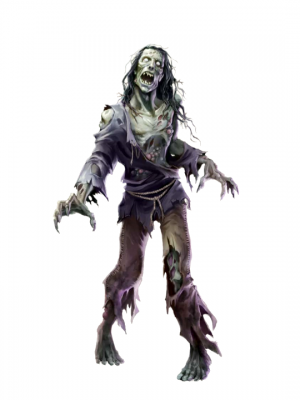