Description
Much like a crawling ooze, meat sludge is a foul smelling, slow moving ooze, which continuously moves in the direction of anything it finds edible, which is just about everything. It seeks out organic matter in particular, and finds stone and crystal to be hard to digest, meaning that it mostly attempts to devour metals and any creature or plant unfortunate enough to be in the area. While it immediately begins to burn away and digest flesh, it takes significantly longer for a piece of metal to start to grow pitted. Where a crawling ooze does not make any further attempt to eat something other than slowly crawling across the ground, a Meat Sludge will spontaneously generate tentacle-like pseudopods out of its mass to lash about, attempting to snatch and devour faster moving creatures that it finds. Occasionally, through an unknown mechanic, it forms an imp within it, which, when fully formed, will pull out of the sludge and generally begin to attempt to gather more things for the sludge to eat. In this way, it perpetuates the cycle and generates more of its kind. Meat sludges, much like crawling oozes, must be burned to a crisp or starved to be fully killed. Almost no other method will work, though small bits of it which are chopped off tend to die almost immediately without anything to absorb.

Location
Underground, usually. Occasionally found in swamps with plenty of undergrowth and decaying matter to digest.

Danger Level
Medium. A prepared person will almost always be able to kill one of these, though they are certainly formidable, and can be hard to deal with in straight combat.

Strengths
Hard to damage through conventional means, usually has one or more imps as followers. 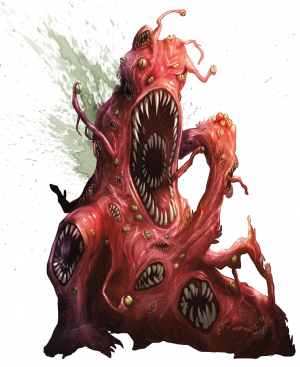