Description
Vicious, giant squid-like monsters, lesser Kraken are thought to be the offspring of Beihst Krione, and thus many believe the larger monster to be krakenesque in form. Lesser Kraken is territorial carnivorous beasts who hunt the waters for small animals, and sometimes small boats. They have even been known to, on occasion, attack larger boats and attempt to bite chunks out of them with their mated pair, who they bond with for life. Lesser Kraken who has found another lesser Kraken to bond with are never seen without their second, and when facing one it is always wise to expect another. Depending on their age, they can be anywhere from ten to thirty meters from the edge of one of their two long tentacles to the top of their spade-shaped heads. They have a huge eye on either side of their somewhat flat bodies, and instead of a beak, lesser krakens have a toothless, gaping maw, which is surrounded concentrically by six smaller tentacles, anywhere from two to ten meters in length, which are lined with razor-sharp cutting “teeth” which they use to pull their prey apart for easy eating. Many sailors carry a dagger just in case they happen to be snatched up by one of these monstrosities, as a quick, self-inflicted death is much preferable to a slow, agonizing one at their ripping, tearing tentacles. 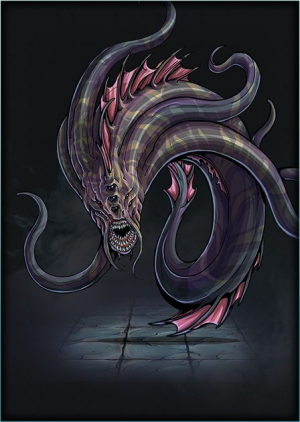