Description
Hydras are huge four-legged creatures with two to fourteen serpentine heads sprouting from their prodigious bodies. Generally speaking, from foot to shoulder, they are three meters tall and about as wide and long, minus their tail. Each head is on a long, prehensile neck which stretches a further four meters, and their tails are about as long. While they hatch with two heads, every hundred years or so a blister begins to form on their shoulder, talking about two decades to fully form, and when it’s fully formed at the end of this period, the other heads gnaw the thin skin off to allow the new head within to burst forth. This process is repeated over the course of their life until they have fourteen heads, after which no more will grow, and they will live out the remainder of their two to three centuries this way. They are known to be extremely resilient, their wounds clotting near-instantly, and all but one of their heads is non-essential. Even the final head is only essential for eating and drinking, making the huge brain and heart located in their large bodies the most essential bit. Generally speaking, they fail to gather enough food for themselves and perish far before they die of old age, but a fourteen-headed hydra at its peak is a terrifying foe indeed.

Danger Level
High-Extreme. Even a freshly hatched, the two-headed hydra is typically more than the average adventurer can handle.

Weaknesses
Piercing weaponry aimed at their body tends to be most effective in killing the beasts. 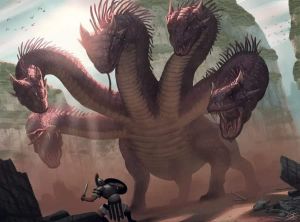