Description
A great horror for anyone travelling in any environment. The Giant Centipede is an intelligent hunter and often lies in wait for anything unlucky enough to come close. Giant Centipedes are often around 10ft (3m) and can weigh up to 330 lbs (148 kgs). Their enlarged pincer can tear the bark from trees and crush bones, however the creature will usually resort to injecting its potent venom through the pincer rather than crushing its prey. The venom is known to paralyse most normal sized creatures, and will cause immense pain in anything larger than the Centipede; it uses the venom to capture and devour its prey slowly.

Location
Found in tree dense underbrush or in dark caverns

Behavior
Giant Centipedes will wander until it finds an opportune location to ambush prey. It will be super aggressive in its ambushes and often paralyses its prey in its first bite. 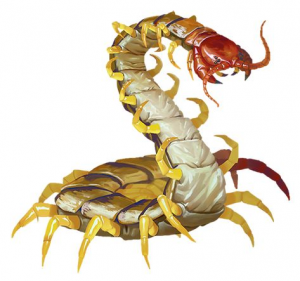