Description
A strong mortal soul that dies without having excessively used magic, or, alternatively, who died due to a specialized magical ritual for the express purpose of producing ghosts, becomes a lingering spirit left on the material plane. These spirits exist because of some unfulfilled purpose, which they must fulfill in order to find final peace. These purposes can be extremely wide-ranging, and on occasion, they are not actually possible to complete by the ghost. In these cases, the ghost will gradually grow weaker and weaker, until they’re entirely incapable of effecting anything on the material plane, and are locked into a perpetual limbo, only able to interact with the other unfortunate souls so trapped. When a soul first becomes a ghost, it is capable of interacting with the material plane, lifting light objects, whispering messages on the wind, writing messages in dirt or sand, and even using Truths, though this rapidly accelerates their decline into an inability to interact with the world. In order to gain some of their ability back, a ghost can “kill” and devour another ghost, fusing its essence with its prey’s to become stronger, and in this way, some ghosts can become true poltergeists, dangerous even to the living, and eventually even becoming visible to the unaided eye.

Location
Everywhere. Anywhere there are living, sentient beings, ghosts are created, though, in societies where people tend to die happy, there are far fewer ghosts.

Behavior
Highly dependent on the ghost. Most are relatively peaceful in pursuit of their goal, though poltergeists tend to be twisted, maddened things, filled with bitter rage and hatred at their permanent entrapment.

Danger Level
Varied. A ghost is usually little danger to anyone, while a truly powerful poltergeist can be strong enough to tear someone limb from limb, and insane enough to try it. In addition, they cannot be harmed by most normal methods, instead of requiring specific circumstances or magics which mirror the cause of their death. Magically created ghosts are vulnerable to all magics.

Strengths
Incorporeal- They cannot be injured by most non-magical means Weaknesses
Almost incapable of interacting with the physical world, they can be near-instantly banished by an attack utilizing that which killed them, only reforming later if they’re very powerful. Otherwise, the soul is destroyed. 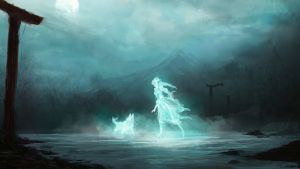