Description
Only rarely seen outside of the Horde, the place between the material plane and the Primordial Dream, these constructs are always in the shape of some animal or insect, usually sized up to three or four meters long. Though frequently made of different materials, sometimes wood, sometimes silver, sometimes oddly worked stained glass, like a living, moving mosaic, but always of fine materials. Inside is a glowing green, vitally pulsing energy which shines visibly from between the plates of its body. Regardless of what they are made of, the strength of the individual plates is magically enhanced to be as strong as steel, and they all move significantly more quickly than most would assume, given their large size and great weight. All of this together makes them very threatening opponents, though they are usually not outright hostile. In most stories, they guard some site of fae ritual importance, or perhaps a specific relic. Rarely, they will accompany an awakened spirit, and even more rarely they can be found roaming, lost without a purpose, though even these tend to be non threatening unless you attempt to physically stop them. Destroying them tends to be a task of bashing them apart piece by piece until they are incapable of fighting, and the magic binding them dissolves, leaving behind only non magical, though usually finely worked parts. Though they can come in the form of any animal, they most frequently are made into the shape of bulls.

Location
Any, though extremely rare.

Behavior
Generally protective of something

Danger Level
Variable. Unless you’re after something they’re protecting, it is low. They are Highly dangerous to those who seek what they protect

Weaknesses
Truths tend to affect them more significantly than physical weaponry, while blunt weapons tend to be most effective 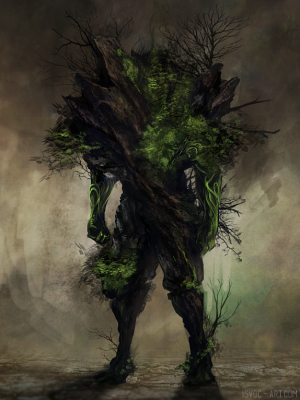