Description
Drakes appear to be large wingless dragons, typically three to eight meters at the shoulder and between eight and twenty meters long, head and tail included. Despite their regal appearance, they are mere predatory animals, who typically live in dense forests, hunting smaller animals like bears, elk, and moose, and the occasional unlucky person who wanders into the wrong section of woods. They are intensely territorial, known to fight both other drakes as well as anything else they catch in their territory. Luckily, they breed extremely slowly, they only eat twice or three times a year, and they only leave their caves or lairs to hunt for food, meaning that they’re very rare to be seen unless you’re searching them down. Their scales make for excellent armor, their bones and teeth can be filed down to make for great tools and weapons, and, depending on their type, they have a gland inside that is full of extremely potent acid or fluid which violently ignites on contact with the air, both of which are valuable. All this together makes for a creature that is highly prized by hunters, and the extreme danger of hunting such a creature makes all of these goods even more valuable than they’d otherwise be.

Weaknesses
They are rather dumb. 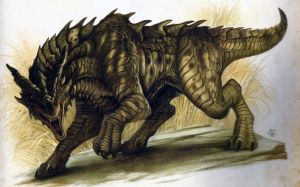