Description
When mass graves, charnel pits, or slaughterhouses are created on the wellspring of a ley line, on rare occasions the corpses will spontaneously be reanimated. These creatures are very easy to mistake for amalgamates, as they take the form of a mass of corpses hideously merged into a single huge body. The difference is that a Death Alemnetry needs no stitches to hold it together, the flesh melds like liquid to create the telemetry, and any it kills it pulls into its own form, growing larger, more bloated and dangerous. Death Alemnetries are intelligent and have been known to speak, but they are beings of pure malice and tend to only curse the living who they are attempting to slay. Somewhere within their massive bodies, which can range from just a meter tall to titanic monsters, twenty meters tall depending on how many bodies they can incorporate, is their heart. The hearts of these creatures are like huge pearls, between ten centimeters and five meters in diameter, inside which is a brainlike structure. The best way to destroy one of these is to cripple them physically, and then remove the brain pearl from their forms, at which point the body will lose the animation. Generally speaking, it is wisest to destroy the pearl, as if they are tossed into another charnel pit, they will merely create a new body for themselves, but some have been known to keep them and implant them into suitably imprisoned corpses in order to attempt to glean some necromantic knowledge from the things. This is typically met with only mixed success.

Location
Almost inevitably around civilizations, though occasionally they spawn from natural mass-death events, such as if a herd stampede off a cliff and the bottom happens to be a ley line wellspring.

Behavior
Aggressive. Seeks to kill and incorporate more creatures into its form.

Strengths
Extremely physically strong. Not resistant to any particular weapon, but it absorbs damage until it is physically incapable of resisting any further. 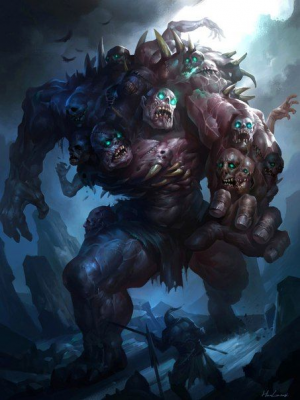