Description
“Where it goes, the winter follows…” Coldwind is the creation and offspring of Covrudurth, the Lord of Ice, and exclusively does his bidding. On the first day of winter, when the tundra ringing the waist of the world is at its widest, it is Coldwind who is sent out to see what mortals are foolish enough to have attempted to colonize that which is rightfully its father’s land. Though the cold of such a place undoubtedly is intense, it is nothing before Coldwind has flown over the territory. Following behind the great Phoenix is a cold front one hundred degrees below zero, with roaring winds the likes of which are not seen in any other part of the world, fit to tear apart any structure which might provide those living within with succor. When Coldwind is a mile out, flames extinguish themselves, impossible to relight, as if to not exist in contravention of the huge beast’s freezing dictates. Finally, those unlucky few who survive the tumultuous winds are typically frozen straight to the bone, left as grisly statues for the other, more conventional servants of Covrudurth to collect. Coldwind itself is a massive phoenix, appearing to be made of blue, freezing flames and some sort of moving, shifting ice. It clearly has some sort of source of light on its back between its wings, because wherever it flies, a beautiful aurora of shifting, rainbow lights is projected into the sky above. Many believe this to be a result of it stealing the lights below it somehow, or perhaps it is the result of some collection and processing of the souls it rips from those unlucky enough to stand in its cold wind. Either way, the beauty of the equatorial lights is undeniable, and almost anywhere in the world one can see the first day of winter by these lights, or by seeing Coldwind flying its path around the equator. 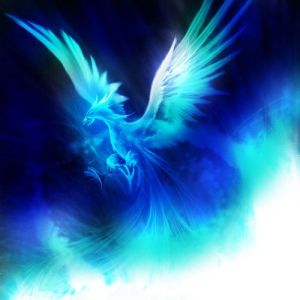