Description
A creature which inhabits old mines, caves and other subterranean locations. The massive claws and giant pincer allow the creature to vicerate and consume anything which is unlucky enough to be in the vicinity of this creature. The beast can stand straight up at around 8ft (2.4m) tall and weigh around 500lbs (226kgs). The carapace armor of the Burrow Bear protects it from all forms of physical damage, allowing it to withstand rocky cave-ins. The creature has developed its senses to hunt in the complete darkness of the caverns and as so has extreme light sensitivity. Location
Any subterranean system

Behavior
Extremely territorial of the caverns it inhabits. It will leave giant distinct claw marks on cavern walls to mark the bounds of its territory. It is an omnivore and will hunt for both living creatures and fungi within its territory. 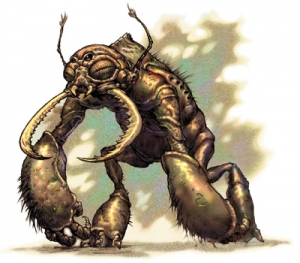