Description
Builder Beetles, as they’re known, are odd, brass, clockwork beetles about a foot in diameter. They’re very helpful little critters, and extremely highly prized for their skills. Each Builder Beetle is equipped with certain small tools, and they attempt to gather a specific type of material to process into a device. Some have building tools, and attempt to construct shrines, buildings, caves, mines, or nests, while others have wood or metalworking tools and seek to construct tools, art, instruments, or weapons. They will only construct things out of the specific material for which they search, and they cannot speak or communicate in any way. Further, they store their tools inside their carapace, so until one has observed them working, it’s nigh impossible to guess what their purpose is. Once one has discovered their purpose, however, it is only a matter of providing it the proper materials and it will eventually construct what it is meant to. For this reason, the value of a Builder Beetle is greatly variable, depending on what it is meant to construct, and out of what. A Builder Beetle whose purpose is unknown is largely a collector’s item, valuable only to someone who is prepared to figure out exactly what the Beetle is for.

Location
Anywhere. Their origin is unknown, though they’re usually found underground, sometimes even in places which have already been combed through. It is theorized that they burrow up from somewhere deep underground, but if this is the case, their source has never been found.

Behavior
They build a single thing out of a certain set of materials.

Danger Level
None, they will not defend themselves in any way, though some have been known to create traps or dangerous items, such as explosives, and leave them littered about in haphazard ways, though this is not a result of any malice, it is merely their purpose.

Weaknesses
Incapable of defending themselves. 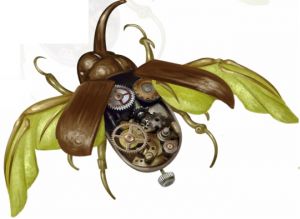