Description
Legend tells of an ancient monster, massive beyond mortal ken, who patrols the deeps. Many say that it is merely a mass of tentacles, longer and larger than can be comprehended, held together by infernal hunger and malice alone. Others say that, deep at the bottom of the ocean, where the tentacles come together, there’s some demonic squid-like creature, pulling down those unlucky doomed sailors to feed its never-ending hunger. What’s clear is that sailing through the waters the Beisht Kione considers it's own is an extremely dangerous and foolish idea, likely to result in your ship being snatched by a massive tentacle and torn asunder, or dragged down to the briny depths.

Location
Somewhere off the north-western coast of Anoma.

Strengths
As strong as a great typhoon, very mysterious.

Weaknesses
Does not leave its territory. 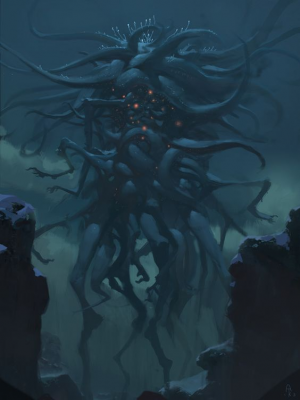